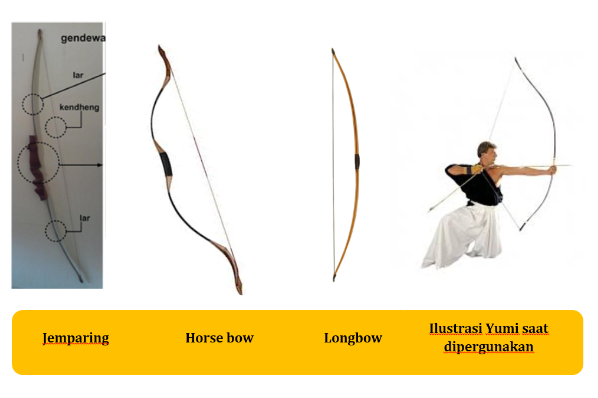 Hello MORA Friend, how are y’all?

Still remember our last convo? The one about types of bows? C’mon, surely u guys haven;t forget about it.

At that time we’ve discussed types of standard bow for competitions, didn’t we? Well, this time let’s discuss about traditional bows, shall we?

Traditional bows have so many types, some countries even have their own unique bows. As we’ve discussed earlier, in general a bow is consisted of a riser, a pair of limbs and a string. The difference merely on the shape. At some bows, the riser and limbs are one undivided form. Following are some traditional bows:

Historically, this kind of bow are used for hunting and fighting in wars, while riding on horse’ back. That’s how they get the name. According to the form factor, this bow is actually one of recurve bows, similar with standard bow and ILF bow. This is because of the tip of the limbs, the part where the bow string is put, is curved away from the archer. Horse bow’ riser usually is made of wood, and the limbs are made of bamboo or fiber glass. The riser and limbs are united using glue and nylon strings permanently, it can’t be detached.

This form of bow is very common used all over the world, including in Indonesia, such us the kingdoms in Indonesia, Korea, Turkey, China, Mongolia, etc.

Following the name, this bow has long, D shape, form factor. The tip of its limbs doesn’t curved away from the archer. Because of the form, longbow usually is quite long, sometime even higher that the archer himself. Usually longbow is made from undivided material, without any part being connected. At its time, this bow is significantly used in battle, although it can also be used for hunting. Longbow are commonly known being used by the old English troops in many battles.

By term, the meaning of the word “Yumi” itself is “bow. But in present day, the Yumi is commonly used to mention classical Japanese bow. Yumi is an asymmetricalbow usually used in ancient Japan. Being told asymmetrical because the riser isn’t situated in the middle of the bow, such as other bows, instead Yumi’ riser is situated at around one third lower part of the bow. Thus, making Yumi look so tall when it’s being used. The tall appearance also amplified by the size of Yumi which average was around 2 meters. Compared with the average height of Japanese people of tha 1900-1930s, which stand around 164cm, Yumi look overwhelmingly tall. The oldest Yumi with asymmetrical form recorded, is estimated from the 5th century.

Well MORA friends, those are some type of traditional bows exist in this world. There’re also many other traditional bows which still haven’t been mentioned, yet. Lots of tribes and nations di Africa, Asia, the natives of American continents, the Aborigins of Australia and many other, they all have their own type or form of bows. Some may have similarities, while other may have their own distinctiveness. Y’all are free to try which one is suits you best, MORA Friends.

Whichever we choose, archery has many positive impact for us, either physically or mentally. Keep up the spirit guys. Stay tuned for more discussion of the archery world, in upcoming articles. See yaa….