The ancient origins of the Olympics 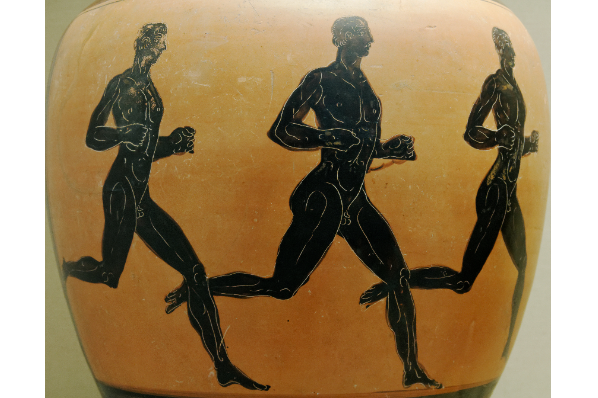 Thousands of years in the making, what began as part of a religious festival honoring the Greek god Zeus in the rural Greek town of Olympia has today become the greatest show of sporting excellence on Earth. The inception date in 776 BC became the basis for the Greek’s earliest calendar, where time was marked in four-year increments called Olympiads. What could it be?

Why, it’s the Olympic games, of course. Competition fosters excellence, or so thought the Ancient Greeks. In addition to sporting events, contest were held for music, singing, and poetry. You can read about them all yourself in classical literary works, like Homer’s “Iliad” and Virgil’s “Aeneid”. Even mythical heroes appreciate a good contest every now and then, wouldn’t you say?

For the first thirteen games, the Ancient Greek Olympics featured just one event, the two hundred yard dash. But over time, new exciting contests, like boxing, chariot and mule racing, and even a footrace where the competitors wore a full suit of armor enticed many hopeful champions into the Olympic stadium. The combined running, jumping, wrestling, javelin throwing, and hurling the discus events known as the pentathlon inspired world-class competition, and the pankration, a no holds barred fight where only biting and eye-gouging were prohibited, ensured the toughest men were victorious.

Nobody tops the local baker Coroebus, who in 776 BC became the very first Olympic champion. And we’ll never forget Orsippus of Megara, the 720 BC Olympic victor tore away his loincloth so he could race unimpeded, inaugurating the Ancient Greek tradition of competing in the nude.

In 391 AD, the Christian Roman Emperor Theodosius banned pagan practices, so the world soon bid a fond farewell to the Olympic games. But just like those early pankration athletes, you can’t keep a good one down, and 1500 years later in 1896, the modern Olympic games kicked off in Athens, Greece. Today, the Summer and Winter Olympics bring international world-class athletes together by the thousands, uniting fans by the billions for the world’s foremost sporting competition. Citius, Altius, Fortius, are the three cheers for the Olympics.