Why do we have museums? 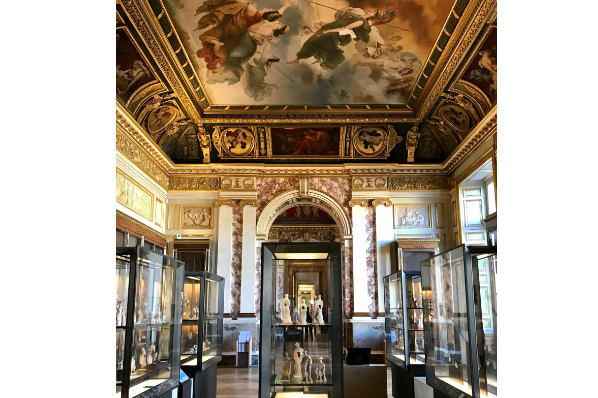 Hello, MORA friends. Let’s begin our guided tour. Welcome to the museum of museums. Museums have been a part of human history for over 2000 years. But they weren’t always like the ones we visit today. The history of museums is far older and much stranger than you might imagine.

We’ll start over here in the Greek wing. Our word museum comes from the Greek mouseion, temples built for the Muses, the goddesses of the arts and the sciences. Supplicants asked the Muses to keep watch over academics and grant ingenuity to those they deemed worthy. The temples were filled with offerings of sculptures, mosaics, complex scientific apparatuses, poetic and literary inscriptions, and any other tribute that would demonstrate a mortal’s worthiness for divine inspiration.

We have arrived at the Mesopotamian wing. The first museum was created in 530 B.C. in what is now Iraq. And the first curator was actually a princess. Ennigaldi-Nanna started to collect and house Mesopotamian antiquities in E-Gig-Par, her house. When archaeologist excavated the area, the discovered dozens of artifacts neatly arranged in rows, with clay labels written in three languages.

The tradition of collecting and displaying intriguing items began to be mimicked, as you can see here in the Roman Empire wing. Treasure houses of politicians and generals were filled with the spoils of war, and royal menageries displayed exotic animals to the public on special occasions, like gladiator tournaments.

The next step in the evolution of museums occurred in the Renaissance, when the study of the natural world was once again encouraged after almost a millennium of Western ignorance. Curiosity cabinets, also referred to as Wunderkammers, were collections of objects that acted as a kind of physical encyclopedia, showcasing artifacts.

Ole Worm’s cabinet, one of the most notable Wunderkammers belonged to a wealthy 17th-Century naturalist, antiquarian, and physician Ole Worm. Ole Worm collected natural specimens, human skeletons, ancient runic texts, and artifacts from the New World. In other curiosity cabinets, you could find genetic anomalies, precious stones, works of art, and religious and historic relics. These cabinets were private, again, often in residencies, curated by their owners, rulers, and aristocrats, as well as merchants and early scientists.

Now, who hears a circus organ? In the 1840s, an enterprising young showman named Phineas T. Barnum purchased some of the more famous cabinets of curiosity from Europe and started Barnum’s American Museum in New York City. A spectacular hodgepodge of zoo, lecture hall, wax museum, theater, and freak show that was known for its eclectic residents, such as bears, elephants, acrobats, giants, Siamese twins, a Fiji mermaid, and a bearded lady, along with a host of modern machinery and scientific instruments.

Museums open to the public are a relatively new phenomenon. Before barnum, the first public museums were only accessible by the upper and middle classes, and only on certain days. Visitors would have to apply to visit the museum in writing prior to admission, and only small groups could visit the museum each day.

The Louvre famously allowed all members of the public into the museum but only three days a week. In the 19th century, the museum as we know it began to take the shape. Institutions like the Smithsonian were started so that objects could be seen and studied, not just locked away. American museums, in particular, commissioned experiments and hired explorers to seek out and retrieve natural samples. Museums became centers for scholarship and artistic and scientific discovery. This is often called the Museum Age. Nowadays, museums are open to everybody, are centers of learning and research, and are turning into more hands-on institutions. But the question of who gets to go is still relevant as ticket prices can sometimes bar admission to those future scholars, artists and targets of divine inspiration who can’t afford to satisfy their curiosity.